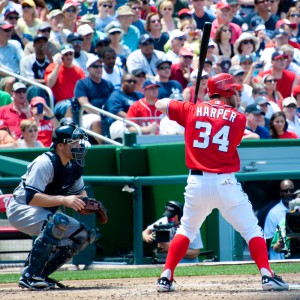 BABIP, or batting average on balls in play, is now a commonly used stats and maybe it can be used to be better prepared for the fantasy draft 2019? A significant different BABIP season can maybe be because of great defense or simply luck. A batters BABIP is best compared to his career value to see if the new stat line is sustainable. In this article 140 qualified batters BABIP in 2018 were compared to their career number. The difference can maybe tell us something where we might find hidden value, and players who will be significant better compared to last year?

BABIP (batting average on balls in play) is one way to calculate the value of a player. Even more useful it can be compared to his career average. If suddenly one season is completely different and he has not changed his way of playing it can maybe be due to defense or just luck. If we then assume the defense and luck will even out, a bounce back season might be on the horizon.

It is important to remember the difference in BABIP can be due to many different reasons, and if the goal is to find differences which will even out, we have to be careful. A way to determine change of playing style can be to examine launch angle, groundball-, flyball- and line drive rate. Another important thing to remember is sample size. It has to be large enough to make more precise predictions and evaluations. A player who has only played a couple of seasons will likely adapt to big league pitching, and the numbers must be judged with this in mind.

The purpose of the article is to find outliers among BABIP and then try to make projections of better performances in the future. Maybe it is possible to find hidden value, which can be useful information before the fantasy draft? Remember a batters BABIP tend to trend close to their career BABIP, if now sudden changes have been made.

Stats from 140 qualified batters in 2018 have been collected and then compared to their career BABIP. The difference was calculated in this table.

At the top of the list we find Baltimore Orioles Chris Davis. He had a historically terrible season in 2018, and his BABIP difference was by far the biggest. It is reasonable to assume he will bounce back, but of course the question is how much and will he still be fantasy relevant? In deep fantasy leagues Chris Davis can maybe be a player to target, if you get him at a reasonable draft position.

Odubel Herrera will play for a Phillies team in 2019, which want to contend. He makes a nice candidate for a come back season. Herrera’s line drive rate was down in 2018, 18.3 % compared to career 21.1%. The flyball rate was on the rise instead, and ground ball rate was about the same. Herrera is an interesting player to target in drafts using this analysis. Kind of scary is to see Jose Ramirez on 11th place. He had a breakout 2018 campaign, and to see it is possible he might even be better in 2019.

A closer look at the superstars is always interesting. Boston Red Sox had a historic season an many ways and their best player was without doubt Mookie Betts. He also standout above because he was the player of all 140 who had the highest rise in BABIP 2018 compared to career numbers. A relevant question is of course if we can expect a regression? However, even if Betts was predicted to have a worse season he will still be drafted top three in most fantasy formats. A closer look at Betts swing shows he cut down on his ground ball rate and instead produced more line drives and fly balls. To project a regression is maybe not wise when we talk about Betts, one of the best players in baseball. Bryce Harper is another player who might get better results in 2019, using the analysis above. Mike Trout was close to his career average in 2018 and he is still mister Consistent (consistently great).