Should we be worried about Boston Red Sox ace Chris Sale?

Boston Red Sox ace Chris Sale has lost some velocity four seamer in his first two starts of the 2019 season. A loss in velocity can sometimes indicate a bigger problem and if you have invested a high draft pick on Sale you are probably wondering what it means.

A recent trend in fantasy baseball has been to draft great pitchers a little bit earlier compared to last couple of years. Boston Red Sox ace Chris Sale has been one of the best fantasy producers the last couple of years, and he has been taken in the first couple of rounds in most leagues. However, he has struggled to get the velocity on his fastball we are used to. Everybody knows a loss in pitch velocity can indicate an injury or that something is wrong with the mechanics. Red Sox have started the season miserably, but Sale’s velocity has also been one of the hottest topics regarding the team.

Sale has started in two games this season, and the collected data is simply not reliable with so limited pitches to analyze. But at the same time, we have to dig deeper because it is not an average pitcher we are talking about, and his velocity drop has been pretty significant.

Data has been collected from Baseball Savant to maybe understand what has happened better. In his first two starts in 2019 Sale has thrown 163 pitches, and 50 (25 in each game) of the have been four seamers. The average velocity in game 1 was 92.3 mph and in game 2 it was 89.1 mph. Average spin rate in game 1 and 2 was both 2268.

In the picture below (picture 1) we can see Sale’s average pitch velocity on his four seamer on a per game basis. It is not uncommon pitchers struggles to put up high velocity in the first games of the season. We have to compare the numbers to other starts early in the season. The first game of the season was lower than many other years, but the difference was not remarkable. But when we see the velocity for game 2 we become worried. It is below anything he has pitched before in his career (during when we have velocity data). 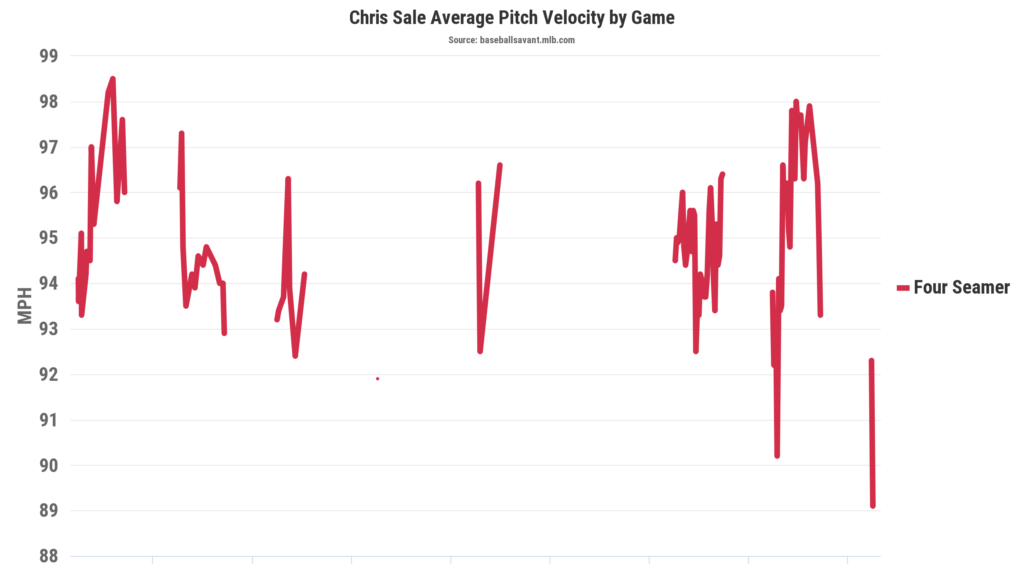 Another way to look at a possible injury or mechanics problem is to look at average spin rate on the fast ball. Is the difference the same as the velocity? The data for spin rate has not been collected as many years, and the conclusions are therefore a bit limited. But as we can se below (picture 2) the difference compared to other years is not big at all. Sale has been putting up the same spin rate as the years before and in the same period of time. In this case early in the year. 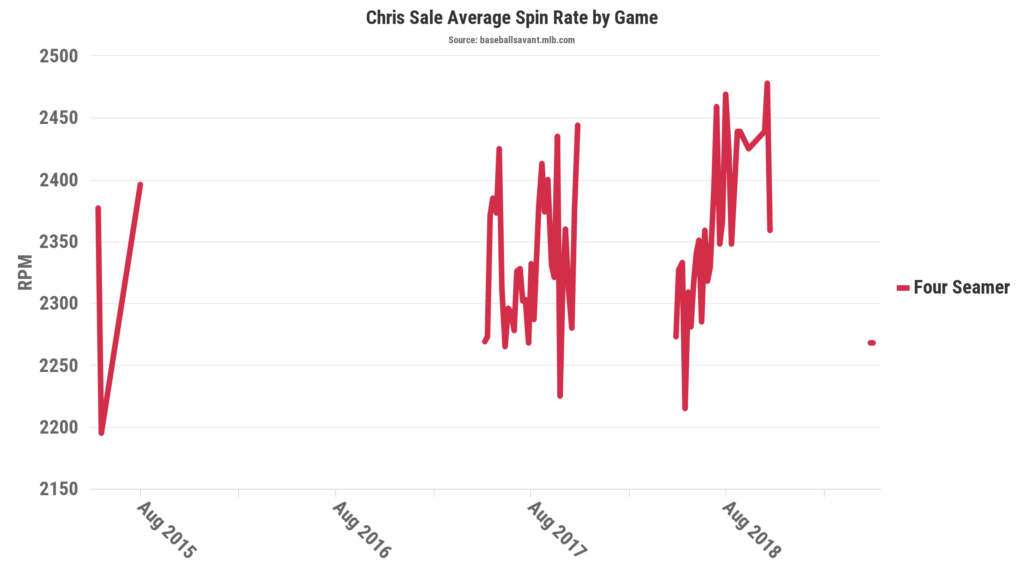 It is also important to see if he has used his fastball a lot less compared to other seasons. In the picture below (picture 3) we can see it is roughly the same as in the past seasons (2017 and 2018). 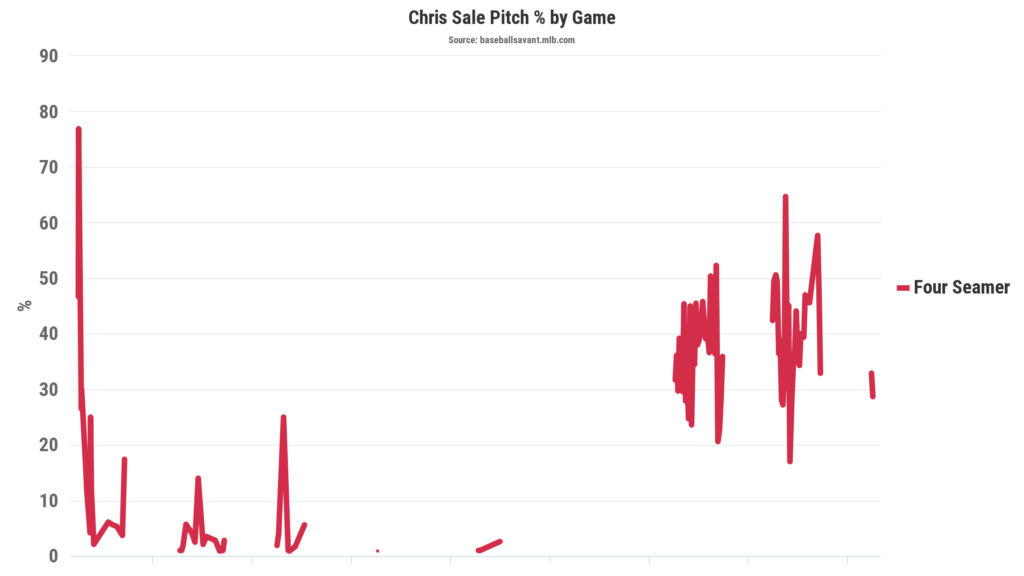 Can we draw any conclusion form the limited data we have for the two games in 2019. The first start of the season was not that different compared to some of the other years, but the velocity in game two gives us some reasons to worry. However, remember now we are talking about one game. The spin rate Sale has created is about the same as other years. In the aspect of spin rate, we can not detect any reasons to believe in an injury we do not know about. It is not the time to push the panic button on Sale yet. He could have a slow start to the year, because of his limited time pitching in spring training. Every game from now on will give us a lot more information and his game 3 this season will be extremely interesting. If his velocity does not reach above 90 mph, it will be troublesome, but if he can increase it Sale will probably be as dominate as before. No need to worry just yet, but keep track on the numbers/data for game 3.