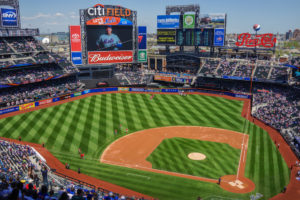 Baseball is a unique sport in the sense all stadiums are not the same. Some difference on the measurements are common. Other differences can also be weather conditions and the altitude of the stadium. The articles study the difference in strikeouts between different stadiums. Strikeouts are commonly used as a category in Fantasy Baseball, so can we find an advantage in knowledge about the Stadium?

First some teams have played “home games” in different stadiums but in the stats above adjustment has not been made. All Stats are from 2018, which for example is important for Arizona Diamondbacks, because they installed a humidor just before the season began.

As with all statistics this particular stat Stadium Strikeout factor does not take into account the total number of hitters faced in the different scenarios. For example, if a home team has the lead going into the 9th inning the game is over. In one game the two different teams maybe did not pitch the same number of innings. The more innings pitched you can probably assume more total strikeouts. If there is a big difference during a season the stat can be somewhat misleading.

Do not look at the Stadium strikeout factor and assume if you start a pitcher in that ballpark you will get the highest number of strikeouts. Certain teams have more hitters prone to strikeout, and it is what you should look for, besides from the obvious a good strikeout pitcher. Remember the reason we even study this is in Fantasy Baseball is because we are interested in the highest number of strikeouts, for example to win K category in a week.

Certain teams have strikeout pitchers with a very high strikeout percentage. And the stat above will be more accurate if he started the same number of games home and away. If a big difference, the information will be more of limited use.

Comparing most of the ballparks they do not have a big difference at all in strikeout factor, in these cases the calculations importance is negligible.

The calculations above only tell us something about strikeouts and not the overall performance of the pitcher. In most situation you also want few runs allowed from the pitchers, because it also important for your fantasy team.

A flaw in the calculations is not every team plays the same teams exactly the same number of times, if so, it would be easier to interpret the results.

What do the Stadium Strikeout Factor tell us? Well, first of all it tells us what happened in 2018. If there are no new upgrades or downgrades to the stadium itself it can more likely be used to make an educated guess about the future.

If a pitcher changed team between 2018 and 2019, and he moved from a low Strikeout factor to a much higher he might get more strikeouts during the entire 2019 season.

If two teams face each other and you want the highest strikeouts from the game, you want the game played in the Stadium with the highest Strikeout factor. This assumes the same lineups, the same pitcher etc. But the difference is so small so for a single game, the stat will not be of high importance. But if the player changes teams, and get half of his starts at home during a season, it might play a slightly bigger role. This suggests when you evaluate a pitcher for a fantasy draft from a strikeout perspective the stat might give you some useful information.

In the analysis Great American Ballpark, Cincinnati Reds homefield, really stands out. To understand more what is behind the numbers you really have to dig deeper. But it seems like in 2018 it was a lot easier for the Reds pitchers to get strikeouts at home compared to away.