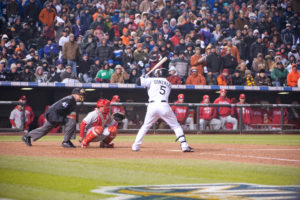 One of things which makes baseball fascinating is all stadium measurements are not the same, and it seems hitters find it easier in some settings and pitchers have more success in others. How much difference is it? And is it really such a thing as a stadium factor? Is it possible to find hidden value when players change teams? Home runs have spiked the last couple of seasons, and teams are now built around multiple power hitters. In this article we study the difference between home runs allowed around all MLB ballparks.

Fantasy players already know certain stadiums are know as hitter ballparks, but these assumptions should be built around facts. Home runs can differ from different stadiums as we can see in this table.

The Stadium Home Run factor tells us something about how easy or hard it is to hit a home run in different MLB ballparks. A high factor favors the hitter, compared to a low number which favors the pitcher. The factor is calculated as followed:

First some teams have played “home games” in different stadiums but in the statistics above adjustment have not been made. All stats are from 2018, which for example is important for Arizona Diamondbacks, because they installed a humidor just before the season began.

The stats above is calculated per game basis and not per at bat basis. Maybe one team has had considerably more at bats home compared to away, and that would limit the data calculated.

It is important to know what the stadium factor tells us. Conclusions cannot be made solely on a high stadium factor will give your fantasy team a lot of home runs. The total number of home runs is foremost dependent on the players on your roster. Power hitters will hit more home runs compared to soft contact bats, but if you compare the same kind of player over a large margin of games, tendencies show you can trust the stats more. The numbers above tell us something about a stadium compared to others with the same players. For a single game it will have more limited use, compared to an entire season. You probably want many power hitters to play in a stadium with a high Stadium Home Run Factor because over a full 81 home games season it will give you some extra value.

The stats above are only collected for the 2018 regular season and a better collection of data would give more precise results. Ideally you would make the same calculations for multiple season, as long as the stadiums were the same. Changes to the stadiums are made all the time and it will affect the performance of both hitters and pitchers. A good example is Arizona Diamondbacks installed a humidor before the start of last season, and it was thought to be an advantage for the pitchers.

The Stadium Factor is calculated together for both for left-handed and right-handed hitters/pitchers. Ballparks can be friendlier to one of the above, and next step would be to get more information and maybe find a greater difference.

Surprisingly at the top of the list we do not find Coors Field, who many would have guessed. Instead Great American Ballpark, Cincinnati Reds, is at the top followed by Coors Field and Globe Life Park. Yankee Stadium which is considered very hitter friendly is “only” on 7th place. At the bottom of the list in 2018 we find Marlins Park, AT&T Stadium and Oakland Coliseum, all of them are considered pitcher friendly. The assumptions most fans have made is true to some extent. Hitter ballparks are something the fantasy community tend to talk about a lot, and when starting pitchers are streamed something to consider. Advanced stats have been calculated for players which try to neutralize the stadium factor, which would make it easier to compare players.

Great American Ballpark has become one of the more extreme venues for hitters. Fantasy players tend to underestimate the value in Reds players, and if you can find a good hitter who switches teams to the Reds maybe you will have considerably higher production?

To make a better overall judgement of a ballpark you have to consider other things than only home runs, for example runs. But these numbers give us a pointer about where you want your players to hit/pitch. Variance will always play a big role in fantasy sports during a short period of time, but the only thing you can do as a team owner is to try to give your own team the best chance to win.